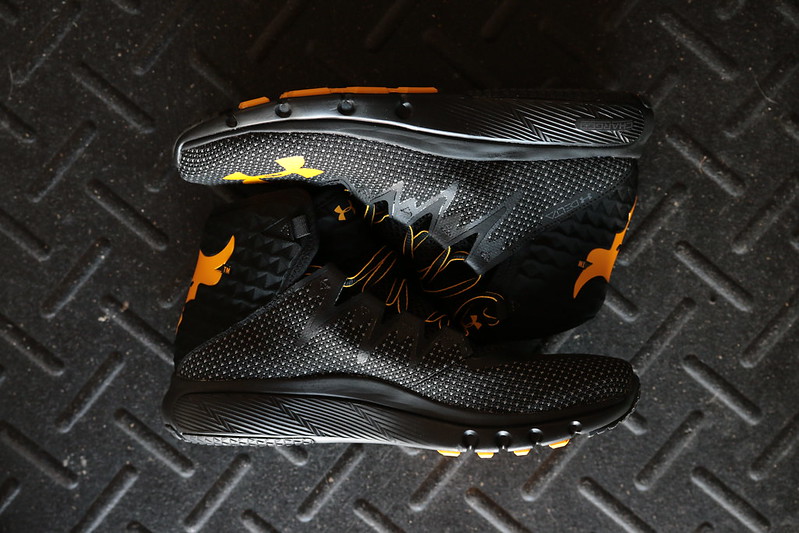 For this review, we’re going to have to step outside the box. Think back to a time before you did functional fitness, back to the days of globo-gym and bro-science; if that’s what you still do, it should be easy. Before I knew anything about minimalist shoes, zero drops, or weightlifting shoes – I, like most people, just wore running shoes to the gym. Granted, leg day wasn’t a big part of my routine and my footwear was more for style than anything else. The crazy thing is that even though the world is a lot more informed now, people still weight train in running shoes. (See: Instagram). Some people just don’t know, or they just don’t care, savages. Either way, people out there still do it and as inefficient as it is, it doesn’t mean that it’s impossible.

When the Rock announced his shoe from Under Armour, I thought to myself, “Finally, a serious training shoe from Under Armour!” thinking the Rock’s input would lead to something a little bit more competition based than what UA had previously offered. Rather than being a completely new shoe built from the ground up, I was extremely disappointed to find out that THE ROCK’s signature shoe was nothing more than a special edition model of a RUNNING shoe that they had already released, the Delta Highlight. Still, it’s the Rock, one of my childhood heroes – how could I not buy his signature shoe?! 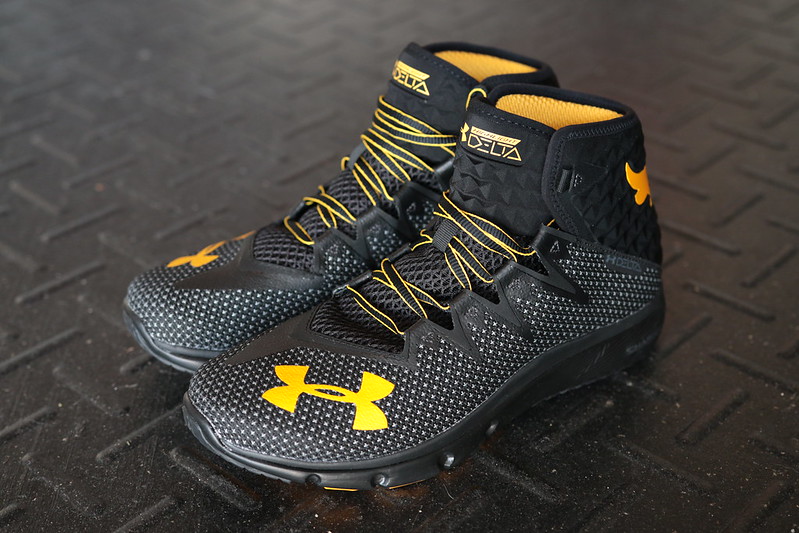 The Delta Highlight as it’s own shoe is actually a pretty good looking piece of footwear, assuming you don’t mind high-tops. It’s upper is a knit like material that’s unlike other knit’s because it lacks any kind of real elasticity.  What I’m thinking is exclusive to the Rock Delta’s is a reflective underlay throughout the whole knit area of the shoe, that not only is functional, but also gives the Rock Delta’s an ultra premium look. Other cues that make the Rock Deltas stand out from the normal ones are the exclusive yellow/black colorway, two of laces (grey or yellow piping), and The Rock’s signature Brahma bull at the rear of the shoe. Some people have clowned these shoes for looking like hiking boots, but I think they look mean AF. 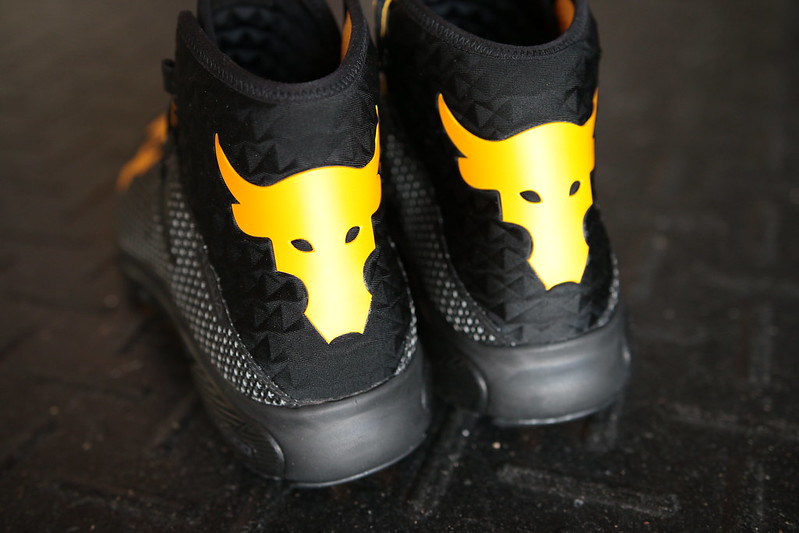 All the Under Armour shoes I’ve come across have never had any issues with build quality. In fact, they’re some of the best built shoes as far as materials I’ve come across and the Rock Delta’s are no exception. There’s no loose glue or stitching anywhere to be found on the shoes and though they’re not terribly expensive, they feel like a shoe that costs more than what they’re asking. Keep in mind that these shoes were not designed to handle the rigors of functional fitness. The upper is lightweight and flexible, but also very thin and the midsole/outsole combination would probably get eaten up in a single rope climb.

The Rock Deltas have a two pieced Charged Cushioning system that consists of a softer piece of foam on top of a more dense compressed EVA foam for comfort, but not too much that it would totally compromise stability. The outsole is pretty solid and has surprisingly good grip, with flex grooves at the forefoot of the shoe and rubber pods at the forefoot and heel. The heel to toe drop is a whopping 10mm, which is a dead giveaway that these shoes are indeed a running shoe. Despite the bulky looks, each shoe only weighs in at 10.8oz. 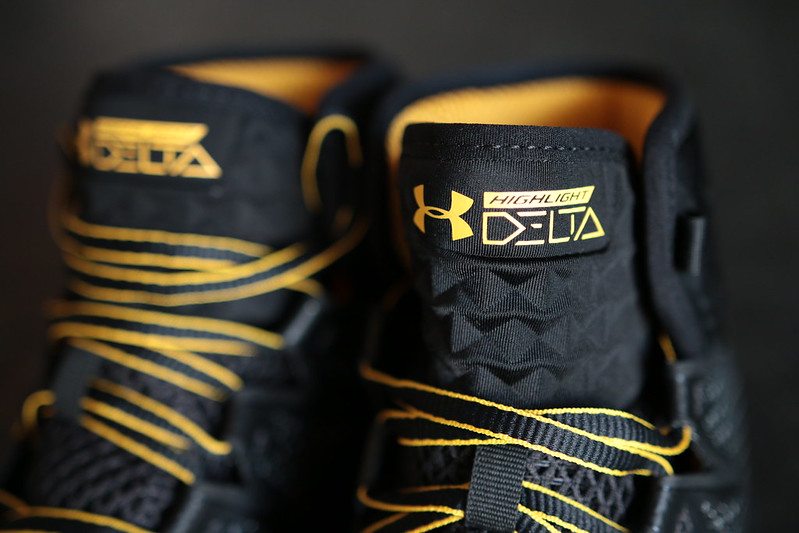 Sizing is pretty consistent to other Under Armour shoes and for the most part is true to size. Unlike most UA shoes, the Rock Delta’s don’t feel the slightest bit narrow and should be comfortable for most foot shapes. The forgiving knit upper probably has a lot to do with the way the shoes fit and I think these are some of the most comfortable shoes I’ve ever worn! My sizes for reference:

This is where things start to get weird.

Fully knowing that these are running shoes, I still decided to do some real weightlifting in them. Those that are used to minimalist platforms will immediately be turned off by the ultra plush (relatively speaking) ride; I was too. Still, I decided to hit some olympic lifts with the intention of removing the shoes before the warm-up was over…but I didn’t. I kept the Rock Delta’s on throughout my whole snatch, clean & jerk, and front squat session. While they definitely weren’t the best shoes to lift in, I could lift in them and not resort to blaming any fails on my shoes. The two piece Charged Cushioning system makes things a little wobbly, but does have pretty good energy return for dynamic movements. Landings in the snatch and clean & jerk were a little sketchy, but I was still able to balance okay. Squatting in the shoes was surprisingly okay as well, with very good lateral stability due to the molded heel cup. You can feel the cushioning pushing back and it takes a little bit to get your feet set, but once you do, you can put up some decent squats…though I would definitely not try to PR anything in the Rock Deltas. 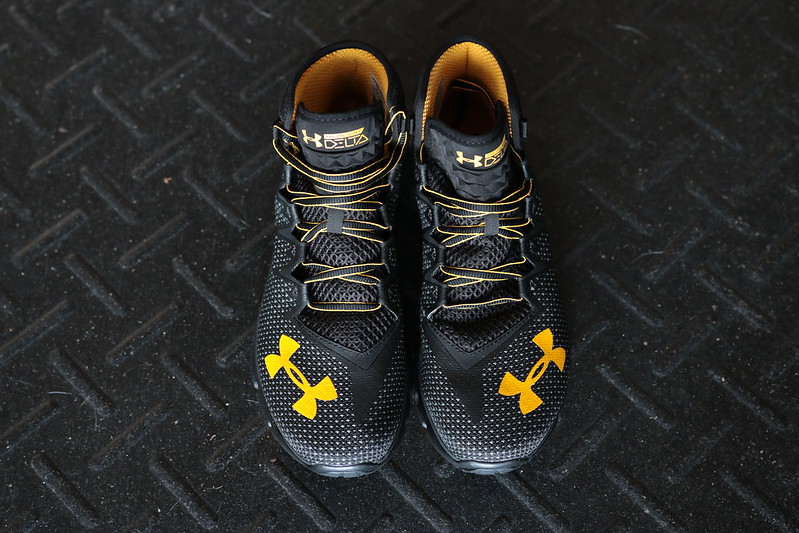 Where the Rock Delta’s shine the most is an area that functional fitness shoes are notoriously bad at: running, duh. The upper moves really well with the foot and the two part midsole cushioning provides a soft and stable ride that’s not only good for running, but plyometrics as well because of how well the Charged cushioning returns energy. I have to say that out of all the actual running shoes that I’ve tried out in recent years, the Rock Deltas might be my favorite because they provide great cushioning without totally diminishing ground feel. I typically have issues with plantar fascitis after a lot of running, but the Rock Delta’s kept my feet comfortable with a WOD that included a 3 mile run, box jumps, and deadlifts. When it comes to a lighter weight metcon, possibly one that is solely plyometrics and running, I couldn’t think of a better shoe to work out in.

Another thing that I was worried about was the high-top cut, but the collar is very flexible and doesn’t cause any kind of chaffing against the ankle, even without long socks. That being said, I think a low-top version of the Rock Delta’s is in order. 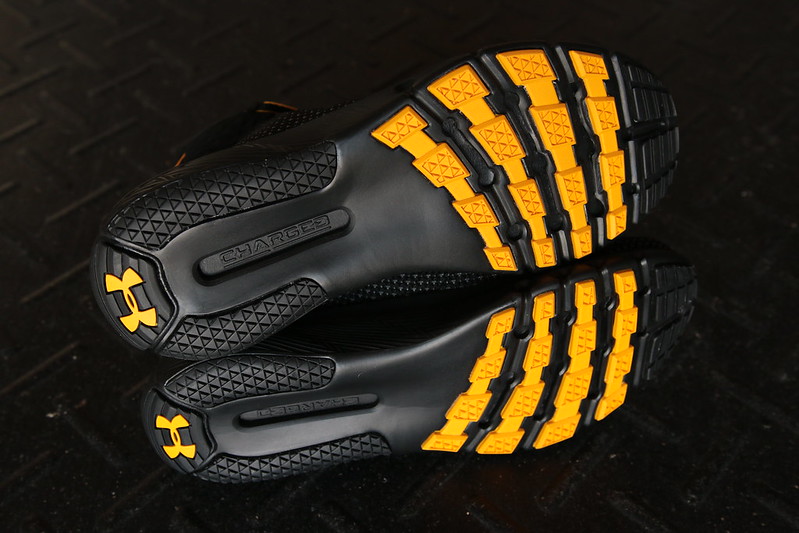 The Rock Delta’s are currently sold out, but normally retail at $140. If you don’t care for The Rock’s branding, then you can opt for the Delta Highlight’s which you can actually get on clearance right now for $90, but normally retail for $120. So should you pay the extra $20-50 for The Rock’s signature shoe? That just really depends on who you are and if you’re a fan. To me, it’s worth it, The Rock was (is) a hero of mine growing up and is much more respectable compared to some of the other worthless celebrities, people support out there.

While The Rock Delta’s might not be the best functional fitness shoes, that doesn’t keep them from being damned good running shoes that you can use for general training as well, considering you’re not going heavy with the squats. I am definitely disappointed that these aren’t a true training shoe, but I’d happily support Dwayne Johnson and rocking his shoes are one of the better ways to do so. If you’re someone looking for an Under Armour alternative functional fitness shoe, you’re still better off looking at the Charged Legend or Ultimate, though they don’t carry the same swagger the Rock Delta’s do. If you’ve got access to a serious pair of lifting shoes, you’re a globo-gym bro that doesn’t care much about leg day, someone in need of some slick running shoes, or you’re just a fan – the Rock Deltas should be a sound choice.

Disclaimer: Andrew Pine is a property solicitor practising in Queensland. Andrew is not qualified to give accounting or financial advice. This article is written solely as an opinion of the writer. This article should not be relied upon for legal, accounting or financial advice. You should always seek advice which is tailored to your individual circumstances.

Andrew Pine specialises in property law, residential and commercial conveyancing. As a passionate part-time property investor, he brings years of valuable insight into the property market and property law.

Get in touch with Andrew: